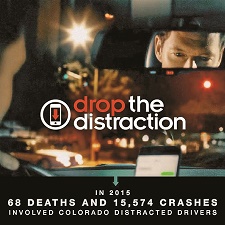 The Greenwood Village Traffic Safety Unit has observed that has been an increase in Distracted Driving related accidents in 2016. As this is an ever growing problem within our society, the Traffic Safety Unit conducts strict enforcement on these types of traffic violations, which can result in a Careless Driving Citation and a fine of up to $120.00 dollars.